Doug and I really enjoyed meeting the new director of the UW Arboretum for this profile in Isthmus.

If you walk the trails of the UW-Madison Arboretum this winter, you may cross paths with Karen Oberhauser. The Arboretum’s new director is on a mission to get to know every inch of the 1,700-acre facility, which includes tall grass prairies, savannas, wetlands, forests and gardens.

“I’m filling my phone with notes as I walk,” Oberhauser says. She hopes to build connections between the Arboretum and researchers, utilize more citizen scientists, and expand the interface between residents and the ecological treasure. 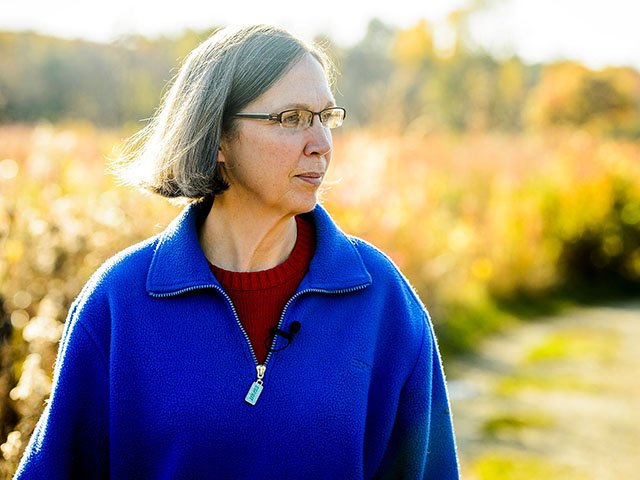 Oberhauser is the first permanent director at the Arboretum since 2012, when Kevin McSweeney stepped down from what is recognized as the oldest and most varied collection of restored ecological communities in the world.

Her path to the top spot is as winding as any Arboretum trail. After earning a bachelor’s degree in biology at Harvard, she came to Madison for a second degree in science education and taught high school science for several years in Onalaska. “I loved it, but I started to take summer classes that involved research, and realized I wanted to do science more than teach science,” Oberhauser says.

“As I worked with graduate students, we became more interested in the big picture of monarch biology,” says Oberhauser. “The impact of climate, nutrient availability, migration pathways and triggers. This was during the time that monarch numbers were really plummeting, and I switched from basic research about understanding monarch biology to applied research, concentrating on how we can protect monarchs. Now I am much more focused on habitat and conservation.”

To study the migration of monarchs, Oberhauser created an army of volunteers across the United States and Canada, who report observations about the butterflies. The effort, with the Monarch Butterfly Sanctuary Foundation, put her at the vanguard of “citizen science,” which involves collaborations between scientists and volunteers who collect and process data. Volunteers contribute invaluable support that would be otherwise inaccessible to scientists working with tight budgets.

“Citizen science has always blended so well with what I do,” Oberhauser says.

A search for a director four years ago ground to a halt after negotiations with the selected candidate broke down, says Norman Drinkwater, associate vice chancellor for research in the biological sciences, who served on the search committee.

“Before starting another search, we decided to review the operations of the Arboretum so we had a really good sense of what the Arboretum needed to fulfill its multiple missions,” says Drinkwater.

After the search resumed, the committee was drawn to Oberhauser because of her research chops. “We feel the research mission has fallen behind the other missions over the last decade or so,” says Drinkwater. “Karen is an outstanding researcher … and we hope Karen will help the Arboretum achieve its research potential. She’s already begun to do that.”

But he adds that Oberhauser understands how to incorporate research with the Arboretum’s other goals. “The main reason we chose Karen was that she had the best sense for how to balance the multiple and complicated missions of the Arboretum,” says Drinkwater. “It is a very popular public space. It also has a strong outreach education mission built of school trips and public lectures. Then there is the mission of restoration and preservation, and fourth it is an outstanding outdoor research lab.”

The Arboretum staff of 24 is already aided by 1,200 volunteers who contribute about 40,000 hours of work on a variety of projects each year. The opportunity to expand the citizen science network at the Arboretum was a big draw for Oberhauser.

“There is great citizen science work going on here,” Oberhauser says. “Susan Carpenter, our native plant gardener, is teaching citizens all over the state to identify and report on rusty patch bumble bees.” Now endangered, this once-abundant bumble bee is an excellent pollinator of wildflowers, cranberries, plums, apples and alfalfa.

Oberhauser would like to get citizen scientists working on projects involving monarchs, dragonflies and invasive jumping worms.

But she knows that most people go to Arboretum to hike and relax, not do research.

“This oasis of nature in the middle of a city is an incredible resource. The fact that this exists in Madison is really special.” she says. “And people use the Arboretum in so many ways.”