Here is my most recent article published in The Dodgeville Chronicle. Doug and I were excited to cover this event. It bodes very well that the Environmental Law and Policy Center has decided to champion protecting the Driftless Area. 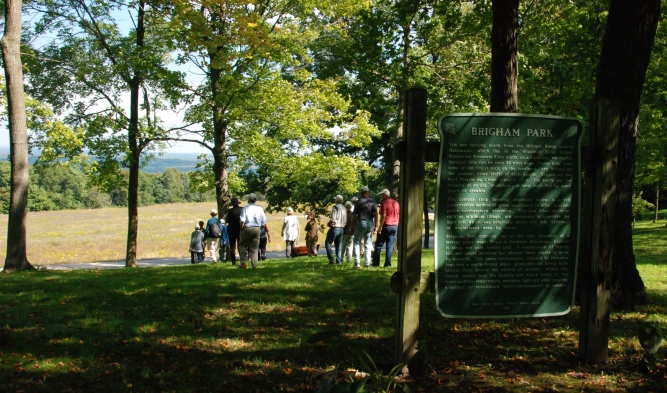 The forces of the Environmental Law and Policy Center and the Driftless  Area Land Conservancy Came together in their appreciation of the natural beauty of this Midwestern treasure.

On Monday a busload of two dozen Chicagoans toured some of the most scenic spots  in Iowa County, but these were no ordinary tourists. They were board members and staff of the Environmental Law and Policy Center (ELPC), a major Midwest public interest environmental legal advocacy and eco-business innovation organization.

Their route took them along the two proposed corridors for the American Transmission Company (ATC) high voltage power line.

Working with the Driftless Area Land Conservancy (DALC), a 15-year old Dodgeville-based land trust that has helped protect 6,000 acres of natural land from development, EPLC opposes the installation of the proposed high-voltage line that would carry electricity between Dubuque County, Iowa and Middleton, Wisconsin, adding about 500 steel towers to the landscape of southwest Wisconsin, each one standing 10 to 15 stories tall.  The proposed line is slated to pass through some of Iowa County’s most fragile environments and places of great natural beauty.

The tour began at Brigham County Park looking out over the countryside beyond.

“The Driftless Area is an area where continental glaciers over the past 2 million years never touched the landscape,” explained David Clutter, executive director of DALC to the tour group.

ATC has proposed two possible routes for the transmission lines, which were marked in blue on the maps handed to the EPLC staff, board members and guests.

“This whole landscape is a very special place, but the transmission lines would come right through,” said Clutter, “either on the north side of Brigham Park or the south side.”

Mark Mittelstadt, a forester and DALC board member added, “We have heard a height of 150 feet for the power lines. The trees are about 75 feet tall, so the transmission towers would be standing well above the top of the woodlands.”

Howard Learner, executive director of ELPC, noted that The Nature Conservancy, a leading global conservation organization, has named the Military Ridge Prairie Heritage Area (95,000 acres of grassland landscape in Dane and Iowa counties) a priority area to protect because it provides habitat for declining species. With more than 60 prairie remnants, it is one of the highest concentrations of native grasslands left in the Midwest. 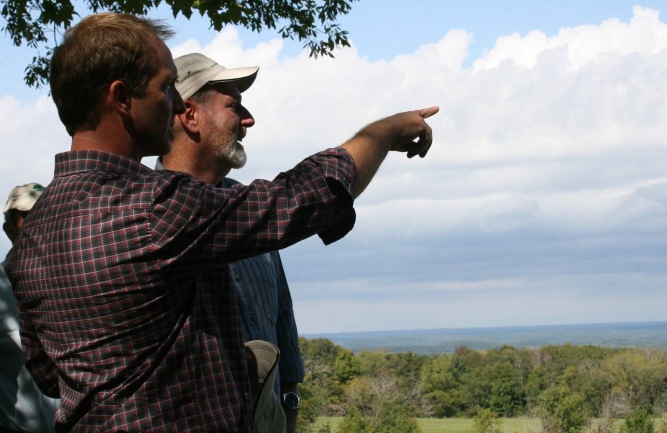 This area has also been identified as the highest priority for landscape-scale grassland protection and management in Wisconsin by the DNR and represents one of the best opportunities in the Midwest to protect prairie remnants and area-sensitive species, such as grassland birds.

The tour continued along State Highway 18-151, one of the two possible routes for the transmission line. Clutter pointed out that there are conservancy easements on both sides of that route. With prairie remnants being protected on the south side of the highway and the DNR Military Ridge State Trail to the north, a 40-mile rails-to-trails project that connects Dodgeville to Madison. The trail runs along the southern borders of Governor Dodge and Blue Mound state parks passing by agricultural lands, woods, wetlands and prairies.

The tour traveled north on County Road Z, where the power lines could potentially run, and stopped to hear from a resident, Betsy D’Angelo. D’Angelo and her husband built their home in the 1980s and own several hundred acres.

“With the tornado that hit two years ago,” D’Angelo told the tour. “four buildings were flattened, my garage needed a roof. My house needed a roof.  In my 100-acre woods, 80 percent of the trees went down. The point is, I thought, aside from death and illness of those we love, that I could never have such a disaster again, and then I got this letter from ATC.  It’s a worse disaster than the tornado. The woods is a heartbreak, but it will grow back over time. But those towers don’t belong here. If I knew it was happening for a public good, I would try to deal with it. But the more I read, the more it seems it’s not necessary and its a business venture, and it breaks my heart.”