RESEARCH AT RISK – WHAT DOES THAT MEAN TO YOU AND ME?

Here is an article I just wrote for Isthmus, a Madison, WI, weekly newspaper.  WHERE HAS ALL THE RESEARCH GONE?  Federal Cuts Threaten Research at UW-Madison.  This situation isn’t confined to Madison.  It’s easy to take the benefits we all receive from scientific research for granted, but we do so at our peril. 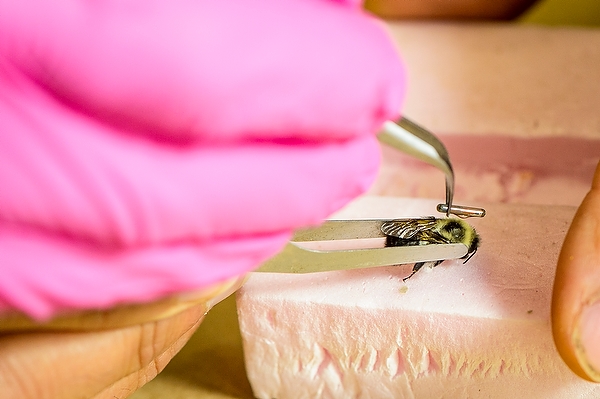 Attach small radio-frequency identification (RFID) tags to bumblebees in a lab at the Wisconsin Energy Institute at the University of Wisconsin-Madison. The tags will provide information to study the bee’s foraging habits in several environments in and around Madison, Wisconsin. (Photo by Bryce Richter / UW-Madison)

University of Wisconsin researchers are laying the groundwork to make it possible to “print” new transplant-ready organs, grown from cells cultured from a patient’s blood sample. This project, which merges research in biotechnology and nanotechnology, is under way today thanks to funding from the National Institutes of Health (NIH).

Over at the Wisconsin Energy Institute, scientists are developing improvements to the electrical distribution grid that will seamlessly integrate renewable and traditional energy sources. The research is being done thanks to Department of Energy funding for the Power Systems Engineering Research Center.

Students (from left to right) Andrew Dias, Jeremy Schaefer, Andrew Bremer and Jeremy Glynn work together to create a low-cost spirometer in the Engineering Centers Building at the University of Wisconsin-Madison . The device is used to measure lung function and could be used in low-income countries to diagnose and manage respiratory disease. The work is part of a Biomedical Engineering Design class project designed by postdoctoral fellow David Van Sickle.

Just a short walk over to the chemistry department, researchers are addressing the threat that strains of harmful bacteria present as they become increasingly antibiotic-resistant. What they are learning may become a next-generation line of defense against serious infections. This promising research is also being funded by the NIH and the National Science Foundation (NSF).

But ongoing federal research funding cuts could turn the lights off in these university labs. The jeopardy is real because of the Budget Control Act passed by Congress and signed into law by President Barack Obama in 2011.

From left to right, undergraduates AnaElise Beckman, Michael Zaiken and Alexandra Cohn prepare a bacteria culture for their Biobulb project at the Wisconsin Institute for Discovery (WID) at the University of Wisconsin-Madison. They are developing an idea for a light bulb that is driven by microbes in a self-contained ecosystem. (Photo by Jeff Miller)

Similar cuts affected other funding agencies, and ongoing reductions of as-of-yet-unknown and varying amounts are targeted for budgets through 2023. Approximately 640 fewer competitive NIH research project grants were issued in 2013 to universities, medical schools and other research institutions across the nation as a result, and UW-Madison has taken its share of the pounding. In 2009-10 the campus received $798 million in federal research awards. In 2012-13 that amount had shrunk to $620.4 million.

“There is a definite change in research funding,” says Michael Corradini, director of the Wisconsin Energy Institute. “There is still opportunity, but it requires more proposals and a lot of discussion on the phone, even visiting Washington to get the funding to start or continue your research program. Success divided by all your attempts is low.”

Research expenditures at UW-Madison total more than $1 billion annually. The money is spread throughout the campus. In addition to funding individual research projects, it supports some core research facilities that bring together expensive technology, like high-end imaging microscopes and clean-room facilities that would be outside the reach of any individual lab. “It’s an efficient way to provide expertise and equipment to many research teams without having to duplicate,” says Marsha Mailick, vice chancellor for research and graduate education.

“Research extends beyond the sciences,” says Mailick. “It includes scholarship in the arts and humanities as well as the social sciences, biological and physical sciences. And while the funding streams for each area are different, the growing difficulty over securing funding is a shared concern.”

“Because of the sequester, all of those federal agencies have lowered their funding levels enormously,” says Mailick. “The biggest impact of the sequester comes in areas where there was the greatest success in federal funding in the past, and this is now creating the greatest gap in the capacity of this university to conduct research.” 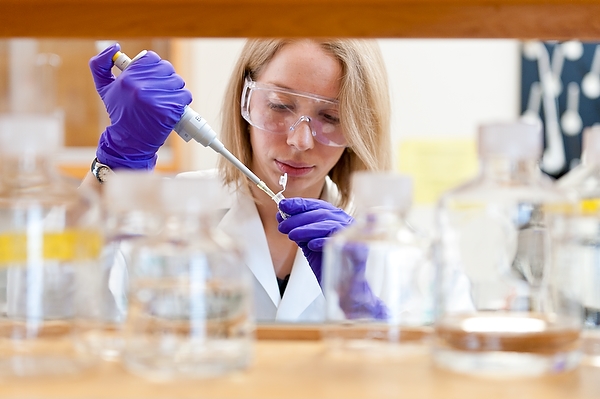 Lindsay Pascal, a graduate researcher in the Neuroscience and Public Policy Program at the University of Wisconsin-Madison, works in the lab of Brian Baldo, an assistant professor of psychiatry, at University Research Park. Pascal’s dissertation research focuses on the brain’s role in regulating eating behavior. (Photo by Bryce Richter)

Mailick is worried about how cuts today will diminish not just the university, but the wider community. “This affects so many areas of our society and so many things we all care about.

“We have the Internet today because of research done several decades ago. We have federal policies about water quality and air pollution because of studies that were done here and elsewhere that led to our understanding of how to preserve our natural resources. We have diseases in the history books like polio that no longer threaten our communities.

“We have a great deal to learn about disorders such as autism. We need to understand healthy aging so we can look to our later years in good health,” says Mailick. “Underlying all of these questions is the need to support research.” 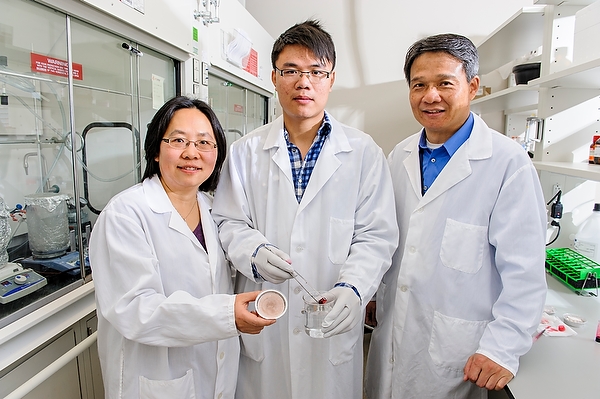 Shaoqin “Sarah” Gong (left), a researcher at the Wisconsin Institute for Discovery (WID) and associate professor of biomedical engineering, graduate student Qifeng Zheng (center), and Zhiyong Cai (right), a project leader at the USDA Forest Products Laboratory in Madison, have recently created and patented a new aerogel technology that may offer a cheaper and greener method to absorb oil and heavy metals from water and other surfaces. Pictured here, Gong (left) holds a sample of the aerogel substance and Zheng (center) holds a sample of the aerogel that has absorbed red-dyed diesel fuel from a beaker of water. (Photo by Bryce Richter / UW-Madison)

Read the rest of the article.