OUR RELUCTANT DECISION TO SPRAY ROUNDUP

When you look at piece of Wisconsin countryside that has been fallow for many years and say, “That would be a great place to grow table grapes and dry them into raisins,” as we did a couple of years ago, you have put your foot on a path that will take you places you might not have imagined.

This past week, we sprayed herbicide on over an acre of our land.  Even now, those words seem strange to write, but Denise and I think it is the best choice. Here’s why.

The rigors and realities of coaxing seedless grapes to grow where for decades a fallow field has flourished requires suppressing competition from well-established plants – deeply- rooted invasives like wild parsnip and Canada thistle, sumac, assorted brambles fighting for light in thick stands of brome grass — the usual suspects that thrive in the rich soil of a sunny, south-facing slope in the Driftless Area.

We’ve been getting to know these current residents well as we’ve mowed and hand-raked the whole area twice this summer (see our post Raking for Fun and Profit).  If it were only a matter of preventing this year’s seeds from sprouting next spring, we could lightly till and plant the grassy paths and grape rows to create a vineyard.  But the current residents would come charging back from their deep and robust roots, and overwhelm the grapes.

You can’t grow great grapes like they are doing at the nearby Wollersheim Winery in a field of weeds.

We have long mulled several ways to clear these bad actors out:

So exactly what is Roundup?

Developed in 1970 at Monsanto, Roundup is the trade name for glyphosate, which is a synthetic compound that gains its toxic punch by adding extra atomic structure to the natural amino acid glycine.  Glyphosate kills plants and micro-organisms by interfering with the synthesis of three amino acids essential for the formation of normal proteins.

Animals obtain these necessary amino acids through their diet, and therefore glyphosate doesn’t have the same effect in the animal kingdom. Human acute toxicity has only been reported in deliberate overdoses, and the EPA considers it to be non-carcinogenic. 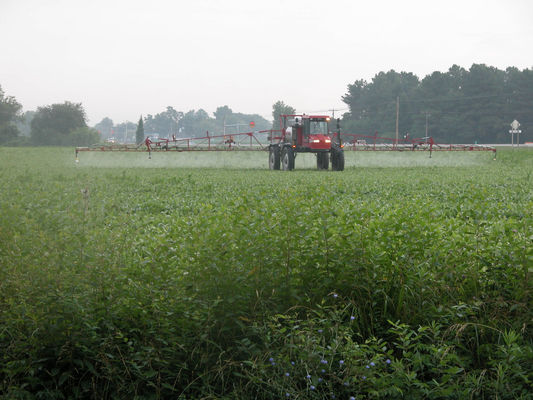 With herbicides, it’s easy to turn use into abuse.

Although there is limited research on the effect of glyphosate on the natural bacteria in our human digestive system, the EPA also reports there are no adverse health effects from a diet derived entirely from glyphosate-sprayed fields at the maximum allowable levels.  That’s probably reassuring to anyone in the habit of eating non-organic grocery store produce and processed foods, and in any event, no one will be eating anything from our field for the next four years.

The scientific literature we’ve read indicates that glyphosate can be harmful but not as fatal to the essential mycorrhizal fungi in the soil, and we are hoping that our one-time use will allow the soil community to heal quickly.  Perhaps because the mode of herbicidal action that kills plants comes from the spray being absorbed directly through the leaves and down into their roots, glyphosate appears to have less of an impact on fungi than on the target plants.

Research indicates that glyphosate binds strongly to soil particles and begins to biodegrade with a typical field half-life of about 6 weeks, breaking down into less toxic components.

There is an ongoing debate about the highly toxic nature of “adjuvants” in herbicides — compounds that are added to the main ingredient, such as solvents for better spray delivery or other ingredients that provide longer-lasting effectiveness even if it rains.  We picked a simple glyphosate with no additives and timed our application to avoid rain.

Once our decision to spray was made, there were many considerations, calculations and assembly of equipment ahead.  If we were going to do this, we wanted to do it right.

We purchased and assembled a 40-gallon sprayer that mounts on the back of our tractor, using its 3-point hitch.  With an electric pump, a 10-foot wide boom and 4 spray nozzles, it’s a tried and true delivery system.  Everything seemed to be well-made, and the only thing missing was two hitch pins that I decided would ensure that the spring-loaded, expandable boom would stay open and operational in the field.

We started by creating a grid across the entire field marked with flags that correspond to the 10-foot boom length.

Next we filled the tank with water for a test run at a controlled speed of about 2 mph, evenly covering the entire 1.2-acre field, which includes both the half acre dedicated to future rows of grapes as well as the grassy aisles and avenues between and around the rows, and an area of land we plan to use to grow mulch for the vineyard and gardens.

This calibration run gave us the data we needed to calculate the total volume of glyphosate solution we needed.

We used our farm status to buy 2.5 gallons of 41% glyphosate concentrate from the Dodgeville Farm and Fleet for $50.  I diluted it down to a 1.5% solution for field application.  (Monsanto suggests dilution to 1% but they sell application-ready solutions that have a 2% concentration.)

After all the research, planning and assembly time, spraying the field took less than 2 hours.  With calm winds and no rain predicted, it was idea conditions for minimizing spray drift and maximizing effectiveness. 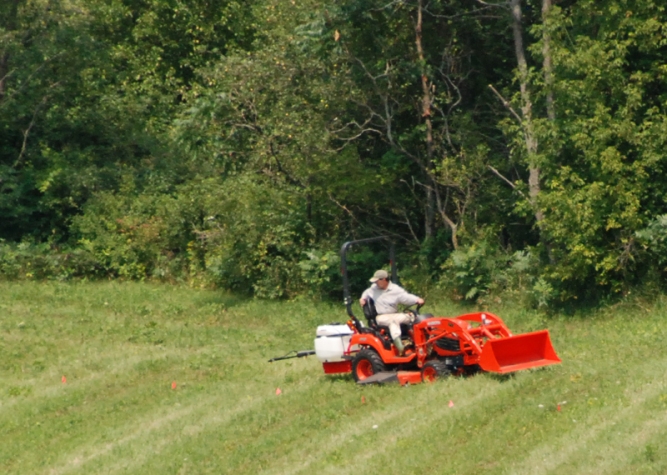 That was 8 days ago, and as of about 4 days ago we’ve been watching the plants, grasses and sumac shoots alike, slowly start to shrivel and die.

This morning we walked out to assess the dead and dying vegetation with very mixed feelings.  We have a remnant prairie just beyond the sprayed area, and it’s heartening to see it in good health.  As we stood at the edge assessing our handiwork, a monarch butterfly landed on a clover flower.  We’ll take that as a good omen that the healing process is about to begin, and healthier days are ahead for years to come in our newly converted agricultural field.

Have you used herbicides on your property?

Which ones do you use, and how have they worked?

How do you feel about this toxic topic?