THE PERPLEXITIES OF PAINTING UNDERHILL HOUSE part one

It’s time to paint the interior of Underhill House!

Doug primes the outside of the pantry.

Doug and I agreed to do the painting ourselves when we worked out the contract to build with Whole Tree Architecture and Structures .  It seemed like one of the ways we could get our hands into the project and save some money too.

I love painting.  It’s like magic you — wave your arm and change the color of your world.  We’ve painted many rooms, but painting a whole house at one time has proved more than we can fit in around our jobs.

The painting has morphed into a joint effort between us and Zach and Jacob of Alchemy Painting.

Like many aspects of building with unmilled, branching timbers, painting takes some extra thought and effort.

The biggest challenge is painting the ceiling.  Our ceiling is pretty unconventional.  It was made by stretching tough, hemp canvas between each pair of rafters.  It’s a solution to accommodate the irregularities of the rafters.

The stretched canvas looks good, but there is a significant design flaw in this approach.  That fabric is what you see when you look up, and many more layers go on top of it.  (See my blog post the First 10 Layers of our Sod Roof. )

The catch is that it is not possible to completely protect the interior ceiling from the elements until the rubber membrane seals the roof.

Until that time, particularly driving rains (and we have had a few of those this building season) managed to soak through to the fabric, and stain it pretty badly.

That meant we needed to paint the canvas ceiling as well as the walls.

This ceiling is NOT Painting 101.

In previously-built Whole Tree houses, the canvas has been painted to cover the stain.  The timbers have been masked off with tape that has paper attached to it to cover the rafters while the canvas was sprayed.

That was the task Doug and I were looking at.  I was feeling a little unsure, and as the time approached, the crew expressed concern about Doug and me painting the ceiling – which can be 17 feet up there at its highest.  We were making arrangements to rent some scaffolding and getting the equipment to mask the timbers when we changed our mind.

What convinced us was the comment by our plasterer, Krome Burke-Scoll of Artisan Exteriors .  “If you have never used a paint sprayer (and we have not) you don’t want to learn spraying by working over your head on a scaffold.”

There was something very compelling about that.  Several people on the crew all suggested Alchemist Painting, so we just called up Zach and he came out to size up the project.

He decided the best way would be to first spray the timbers with the creamy white paint we used on them.  All the timbers did need touching up. 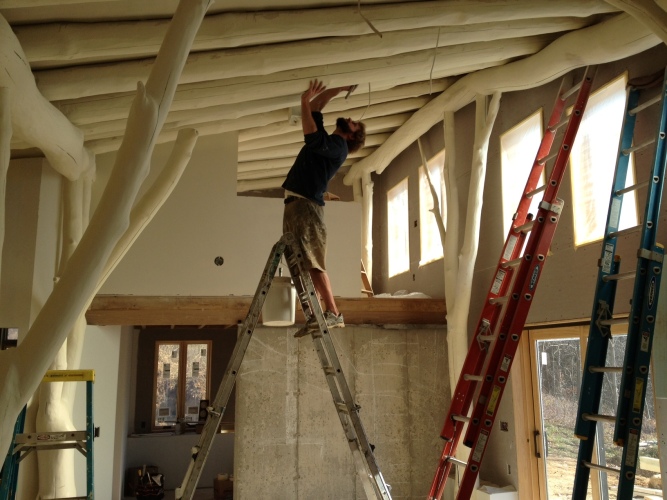 Jacob, a very experienced painter, says this ceiling is the most difficult ceiling he has ever painted.

This is the first house built by Whole Tree with painted timbers.  Since the time we painted them outside on saw horses this spring, they have been stacked and restacked, tumbled, banged about on forklifts and hoisted into the air with a crane – all of which has taken a toll on their flawless finish.

Both the timbers and the canvas stretched between them needed to be painted, and Zach came up with a new approach.  They would spray the timbers and then use a roller and brush to paint the canvas, which is being painted a soft gray to highlight the rugged lines of the white timbers.

This has been our first experience with professional painters indoors, and it’s been a real eye opener.

Spraying paint is a very quick and pleasing way to apply a colorful coating, but it creates a very toxic atmosphere during the spraying.  Jacob, who did most of the spraying really suited up to protect himself and most particularly the inside of his lungs from being coated in latex.

Choosing a paint to use for this purpose was also a challenge.

The Paint needed to:

They tested a number of paints on samples of the canvas and settled on Mystic Paint.  It is flexible, covers well and really sticks.  It’s perfect.

Zach worked with his paint supplier, Premier Paints .  They experimented with a number of paints on some samples of the hemp canvas, and decided on Mythic Non-Toxic Paint for the job.  It’s working beautifully.

I never met a color I didn’t like, but I’m trying to be very concise in the colors splashed on our walls this time.  We are going to have only a handful of paint cans to store when the job is done.

As Zach and Jacob paint that it is taking more to cover.  Canvas soaks up more paint than standard drywall.  But we are pleased.  It looks really great, and it should last a long time.