UP, UP AND AWAY! RAISING THE TIMBER FRAME BENTS AT UNDERHILL HOUSE

In my first post on our timber framing process (Whole Tree Timber Framing Begins at Underhill  House ) I stressed the patience required to start a whole tree timber frame project.

A week later, I’m still trying to catch my breath after a whirlwind ride (literally and figuratively) as the timbers of the main floor were flown into place by crane.

Fitting whole tree timbers, with their sinuous and branching  forms, takes a fusion of engineering and imagination that has me in awe of our timber frame team, Bryan, Prairie, Michael and Brad.  All three bents were fitted together and laid out – two on the floor of the house and one on the ground, and everything was in readiness Wednesday when the crane arrived.

What’s a bent, you ask?  According to Wikipedia, the word “bent” is probably an archaic past tense of the verb to bind, referring to the way the timbers of a bent are joined together.  Whatever the origin of the word, a timber frame bent is a framework that forms the cross-section of a structure.  In Underhill House, there are three bents, each made up of five posts that hold up a beam that runs the full length of the house plus several more feet needed to support the external soffits.  There’s one bent that runs the length of both the north and south walls of the house, and a third that runs down the mid line. 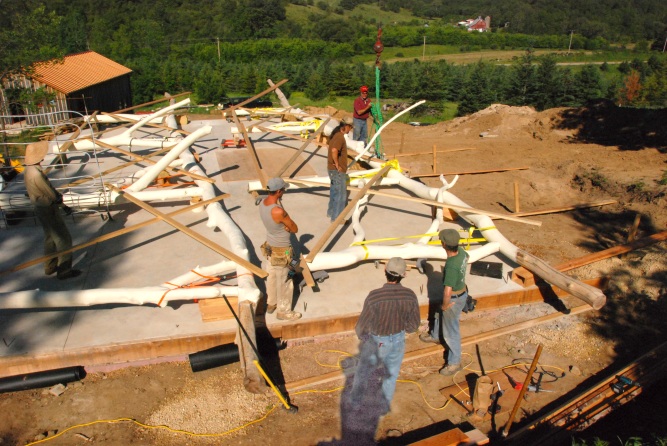 As the crane truck pulled up the drive, our construction manager Bryan, wondered out loud if it would be up to the task.  It was smaller than the cranes of the concrete pumper trucks and the well drilling rig we have recently  watched compacting the soil ramped up around the building site.  When one of these behemoths rolls in, they tend to churn up the hard-pack, leaving deep ruts, and they’re not very manageable on site if the ground is wet.  Fortunately for us, Wednesday was a dry, calm day.

The first step was to level an area where the crane could set up shop, and the sandy clay was re-graded to form a temporary, flat foundation.  Then the first of the bents was lashed in two places using some heavy duty straps capable of supporting it on its short journey from horizontal assembly site on the floor to its final vertical location.

Dan Gingerich, the crane operator, told us that for timber frame jobs, he always launders his straps ahead of time.  A crane finds itself hauling all kinds of grungy, gritty things into the air – corn silos, wind mills.  Dan even has a yearly appointment to hoist a big, frozen carp.  On New Year’s Eve, Prairie Du Chien, Wisconsin hires him for the Droppin’ of the Carp, at midnight in Lucky Park, similar to the ball drop that marks each new year in New York’s Times Square .    It’s a good thing Dan cleans those straps.  We’d rather not have any lingering aroma of Mississippi River carp haunting our timbers. 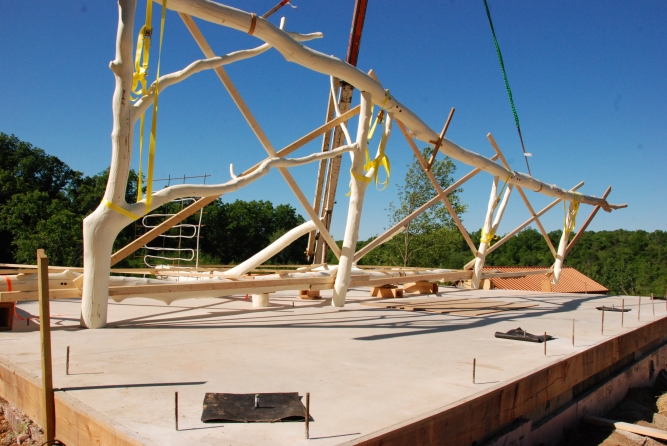 Raising the bents can be hard on timber frame joints.   While they’re designed to resist the force of a building superstructure pressing down from above, they’re not nearly so strong laterally, and once in place, they don’t need to be.  To protect them on their short journey from prone to upright , come-along straps were ratcheted tight to pull each custom-fit post snugly against its beam.The strategy Bryan developed  was to lower each bent at a slight angle, fitting  the eastern-most post onto its pre-mounted steel anchor bolt, then the next post and the next until the west-most post was dropped in place.

The first few posts went home effortlessly onto their bolts, but the last one of  the first bent proved to be s the toughest of all to get into position.  It took about 10 minutes of effort to make the fit.

Even so, the whole process of raising the first bent took about 40 minutes, and the second  bent went in more smoothly.

The final bent was lifted off the ground and flown into place without incident.  As a temporary measure, all the bents were braced in place with boards that will later be used to frame out interior rooms.

Everything went so fast, a real testament to the precision work by Bran and the crew!

Bryan had arranged for an early start, expecting that raising the bents could take a full day and then some.  But with all of the extra time we now had, Dan said, “Come with me for the photo opportunity of a lifetime.”

I followed him saying, “Oh, I love those,” wondering what could top the photos I had been snapping all morning.

He had placed a plank between the sturdy lifting straps and invited me to have a seat.  I thought the photo op was going to be me swinging from the crane like some gigantic playground swing, but Dan began to instruct me on how to fit my arms between the straps and assured me I would be quite safe.  That’s when I realized he was offering to fly me over the building site.

I didn’t hesitate.  Who wouldn’t take a small risk to see the grounds they’ve been lovingly tending for years from a birds-eye view?

Once a belt snugged me in between the straps, I took a firm hold on my camera and rose skyward.  It was a gorgeous day, and the view from  60 feet in the air was breathtaking. 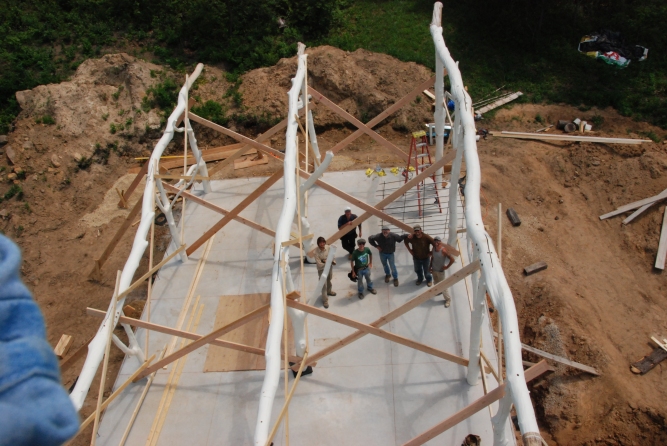 Soaring above the bents put me in a state of elation that is hard to express in words.

Many people have a mental image of a place they visit when they need some relaxation or release, and from now on, my  mental oasis is high in the sky.

I hope that sensation stays with me forever.

For those readers old enough to remember the Mickey Mouse Club, do you also remember that Wednesday is Anything Can Happen Day?

This Wednesday was Everything Can Happen Day for me at Underhill House, a day when I achieved lift off both figuratively and literally.

Thank you, Della Hansmann, the architect of this project.