You can beat it, but don’t eat it

You may have read that the root of wild parsnip is edible – and even sweet, after being exposed to cold.  But don’t risk it.  We are at war with this plant.  It is armed and dangerous, and blatantly defies  the Geneva Convention’s rules regarding chemical warfare.

While  harvesting,  you could easily end up with wild parsnip’s plentiful sap on our skin.  If you do, you won’t soon forget it.  (I know I won’t.)

...Wild Parsnip in a part of our land where we are not winning the war.

The sap contains furanocourarins,  a toxic chemical that soaks into your skin, reacts to sunlight (even on cloudy days) and damages the DNA in every cell it comes into contact with.  The result is painful blistering and dark purple scars that will last for years.

Here is the creepiest part.  You may not realize wild parsnip has attacked.  It doesn’t sting or burn on contact. The reaction takes some time — even days, and by the time you realize you’ve been slimed – the damage is done.

If you do get parsnip sap on your skin, or even suspect that you did, the sooner you wash the area the less you will be affected.  Check out this site for details.

I live in fear that I am going to inadvertently apply a thin but adequate coating while wiping the sweat off my cheek and wake up with a new nickname – Scar Face.

...No matter where you live (except the lucky white states) you are not safe!

When we bought our land in the fall six years ago,  many acres were filled with toddler trees just a few feet tall.  Our first spring we watched in horror as wild parsnip sprang up buried them in its thick, green foliage and sickly yellow flowers.

We borrowed a brush mower and declared war.  Having found out the hard way in our first feckless skirmishes what wild parsnip can do to human skin, it took some nerve, to plunge into the 10-foot wide swaths of parsnip between tree rows  that towered to 8 feet, but as we cut it down year after year the trees began to gain ground.

That’s when another, more surgical tool entered our lives.  The scythe.  With this amazing instrument, we could slip the curved tip of the blade into a group of plants, hook the parsnip stem, give a firm tug and leave the native  flowers standing tall. 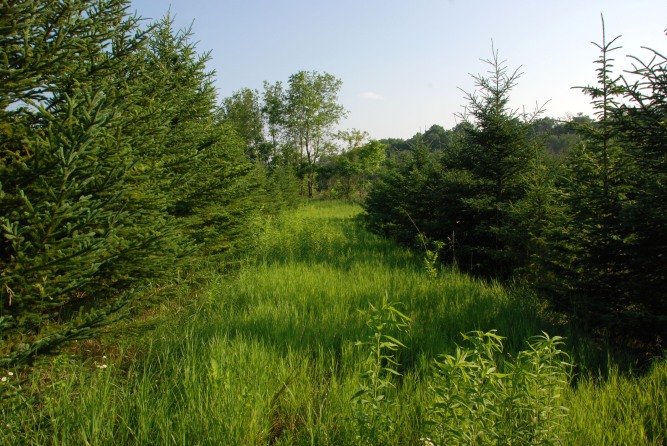 ...A few years ago these spruce were once buried in wild parsnip -- but no more!

Wild parsnip begins life as a rosette close to the ground.  It can go on to its towering, flowering stage the next year, and usually does.  The time to cut is just as they flower but before they can drop their seeds, which is usually early July but has come early this year (climate change?) .  So theoretically, in two years, you could rid an area of this invasion.

In real life, it’s not so simple.  Wild parsnip may spend a number of years as a rosette, and it’s heavy, vital seeds can live in the soil for at least 4 years, so we knew from the start it was going to be a long campaign.

Six years into this war, we are starting to see some success.  Certain areas, such as our prairie, glade and around the barnyard,  (the areas we have declared zero tolerance)  are starting now sport very few of those flat, yellow flowers.

If you have wild parsnip, you can beat it.  You’ll have to go after it several times each season, and cut it again.  It’s got a massive rootfull of energy, and it will send up another flower.  Cut that one too.  It will be smaller.  If necessary cut it again.  It gets easier. 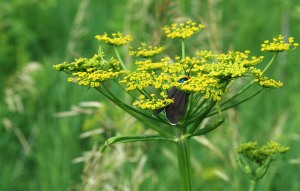 I would love to hear from anyone who is warring with this green meany.  Are you winning?